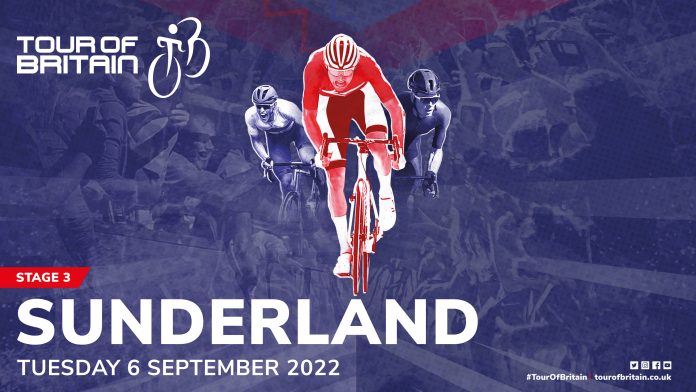 SUNDERLAND city centre will be the place to be when the AJ Bell Tour of Britain comes to the city for the first time next Tuesday afternoon, 6 September.

The UK’s most prestigious cycling race is set to bring world-class sporting action to the streets of Sunderland as part of stage three of the Tour of Britain.

This will see more than 100 of the world’s best riders from 20 teams taking part in the Men’s race and is expected to include world and national champions, including Richie Porte of home fan favourites INEOS Grenadiers and two time Tour de France stage winner Dylan Teuns riding for his new Israel – Premier Tech team. Porte, who plans to retire following this year’s Tour of Britain, finished third overall at the Tour de France in 2020. His five INEOS Grenadiers team-mates will be announced soon.

ITV4 will also be broadcasting live coverage of the Durham to Sunderland stage, which will be shown in over 150 countries worldwide thanks to the event’s partnerships with Eurosport and the Global Cycling Network.

As Sunderland gears up to host the Tour, here’s a handy guide to everything you need to know about the visit:

What is the Tour of Britain?
Re-launched in 2004 after a five year absence, the Tour of Britain is the UK’s biggest and most prestigious bike race that attracts the world’s top cyclists – including Olympic and World Champions, and Tour de France winners – to compete over eight days each September. It forms part of the UCI ProSeries, making it one of the most important events on the road racing calendar.

Where and when is it taking place?
The eight stage 2022 race kicks off in Aberdeen on Sunday 4 September and finishes at The Needles on the Isle of Wight on Sunday September 11.

Stage Three will see more than 100 of the world’s best cyclists tackling the 163.6km (101.7m) stage which begins in Durham. This culminates outside City Hall in Sunderland City Centre at approximately 15.20 on Tuesday 6 September.

The race will enter Sunderland at Moorsley at approximately 15.00, head towards the A690 Board Inn roundabout and then follow Durham Road towards the city centre, past Barnes Park and Mowbray Park, finishing at City Hall on St Mary’s Boulevard at the heart of the £500m Riverside Sunderland development.

What can I expect?
An amazing spectacle, mixing fast-paced action with a friendly atmosphere, not to mention over 100 of the world’s best riders thrown in for good measure. Expect to see fierce competition as the coveted leaders’ jersey is fought for across eight days of racing.

Where is the best place to watch?
The free to attend sporting spectacular is expected to attract large crowds. The stage finish is on St Mary’s Boulevard in the city centre, with Keel Square hosting the official event village from 11am.

There you will find two big screens to watch the full stage race action before riders arrive at the finish line, catering, event sponsors – Eisberg, Skoda and Fenwick – exciting activities to get involved with as well as the podium area where stage winners will be presented to the crowds.

A testing 1.3km SKODA King of the Mountains climb at High Moorsley on the outskirts of Sunderland, 20km from the finish line may also attract spectators who can watch the race anywhere along the route. Some communities on the route are planning their own celebrations to get into the spirit of the event.

How will I know when the race is passing through?
Although there is no way of guaranteeing when the race will be passing a particular point, the Tour produces a guide AJ Bell Tour of Britain | Stage Three of where the riders are likely to be along each stage according to a slow, normal and fast pace. As the race approaches the ETAs will be published on each individual stage page.

Will there be road closures?
A temporary road closure will apply on all roads being used for the race route from approximately 2.45pm. Strategic vehicle crossing points will be maintained along the route until the race pack is near. Once the race pack is near a particular section of road, the road will be closed completely until the race has passed. Once it has passed, the road will be reopened.

Getting There
There a number of ways of travelling to Sunderland, where stage three will finish at Keel Square at approximately 15.23. Please plan your journey in advance and wherever possible travel using sustainable and active transport options. As parking in the city centre will be limited during the event, spectators are being encouraged to use public transport.

Train and Metro
Sunderland Railway station is approximately 500 metres (0.3 miles) away from the finish line. This is served by trains from Newcastle, Newcastle Airport, Carlisle, Middlesbrough and London King’s Cross. There will also be Metro trains running to St Peter’s, Sunderland and Park Lane Interchange. Visit Metro | nexus.org.uk  or call Traveline on 08712 002233.

Bus
A number of bus services from across the city and wider region stop in the city centre at Park Lane Interchange, a short walk to Keel Square. Visit Bus timetables | nexus.org.uk  or call Traveline on 08712 002233.

Car parking
There are limited car parks nearby which you can view Car parks – Sunderland City Council . There is also a pay and display car park at The Bridges Sunderland a short walk to Keel Square. Please note St Mary’s Car Park and Livingstone Road Car Park will not be accessible on day of the event.

I live on the route, what can I do to help?
It would be fantastic to see communities, schools and businesses along the route out supporting the race. Please help us make the Tour as safe as possible for the riders by avoiding parking along the course.

Councillor Claire Rowntree, Deputy Leader of Sunderland City Council, said: “We’re tremendously excited to be gearing up for the arrival of the fantastic AJ Bell Tour of Britain Men’s race stage finish coming to Sunderland on the afternoon of Tuesday 6 September.

“The Tour is a hugely popular event and it promises to be a brilliant day out for residents and visitors alike. The sheer spectacle of over 100 of the world’s best riders racing through our city will truly be a sight to behold.

“This is a fantastic opportunity to showcase our fabulous city to a national and international audience and we hope communities along the route will come out to cheer the riders on.

“It’s been a fantastic few months for major sporting events in our city with the Tour Series in May, the British Triathlon Super Series Grand Final this last weekend culminating in the Tour on Tuesday 6 September.  We hope that seeing elite riders in action will encourage more people to get out and about on their bikes as part of our Swim Bike Run programme and take advantage of our wonderful city, green spaces and fantastic coastline, and the physical and mental health benefits that being active brings with it.”

Race Director Mick Bennett, said: “Anticipation is really building ahead of stage three of this year’s AJ Bell Tour of Britain. We cannot wait to promote Sunderland to our worldwide TV audience and showcase the spectacular new City Hall. Through our previous visits to the North East we know how passionate and enthusiastic people are when it comes to sport, so I’m sure they’ll turn out in great numbers for this free-to-watch, world-class event next Tuesday!”

To find out more and plan your trip visit: Tour of Britain stage finish – MySunderland