One night in a pitch-black hallway Professor Peter Smith was making his way back to the bedroom when he took a wrong turn, fell down the stairs and broke his back.

Paralysed from the neck down, in a split-second Peter’s life changed completely, except for the one thing that he refused to change: his love of punk rock music and concerts.

In a new book – My Travels Through the Maelstrom of Punk Rock, the University of Sunderland academic shares his inspirational story of tragedy, pain, willpower and grit, and the ability to keep on doing what he loves most.

Father-of-three Peter, 65, from Sunderland, explains: “I have lived a full, exciting, and unique life. In my youth I lived a conundrum. My rebellious nature drew me away from my academic studies into the world of punk rock; a very different world to that which I normally inhabited. Some might say I was a middle-class, aspiring academic.”

The punk rock journey began in the mid-1970s, in a small pub in Whitby, when Peter saw a performance by Sex Pistols which he says: “shook me to the core and changed my worldview of music forever”.

He adds: “From then on, we were caught up in a whirlwind of punk rock, seeing The Clash, The Damned, The Jam; all the early punk bands during 1976 and 1977. It was a magical, explosive and sometimes scary journey. Amidst a sea of punks, my long hair stood out, attracting trouble and tempting danger. We managed to avoid many fights, pint glasses flying around, and running a gamut of skinheads waiting for us outside. Life was dangerous, wired, scary yet fun!”

Despite his wild youth, Peter grew up to become an internationally renowned academic and professor. For more than four decades he has had a profound impact on hundreds of students at the University of Sunderland through his lectures in mathematics and computing, academic papers, alongside supervising PhD researchers. He has published over 300 books, papers and articles across a range of topics including computer science, management and music.

Despite the life-changing fall at his home in 2016 leaving him in need of 24-care, as well as losing his wife Marie to cancer three years later, Peter continues to support PhD students from across the world, teaching online and supervising with the help of technology, alongside his writing.

To date, Peter has attended more than 2,000 concerts, documenting and cataloguing every gig he’s attended, producing a music blog and writing about those experiences.

He says: “I continue to go to gigs, work and live a full life. This book is a cathartic reflection of my days as a punk! I hope you enjoy joining me on my journey through a strange life mission.”

My Travels Through the Maelstrom of Punk Rock, is published by New Haven Publishing Ltd, and has been co-written by Peter and his daughter Laura Smith. 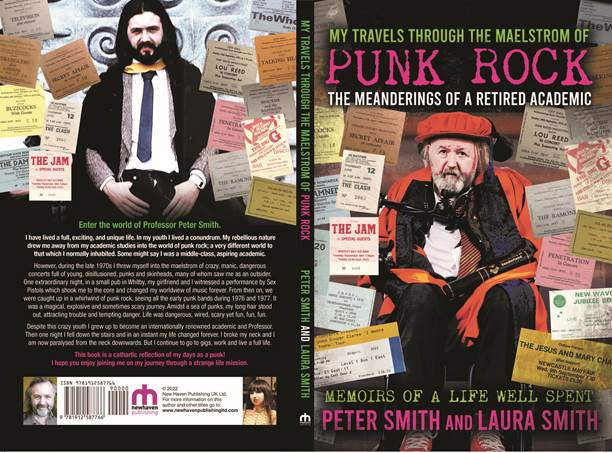