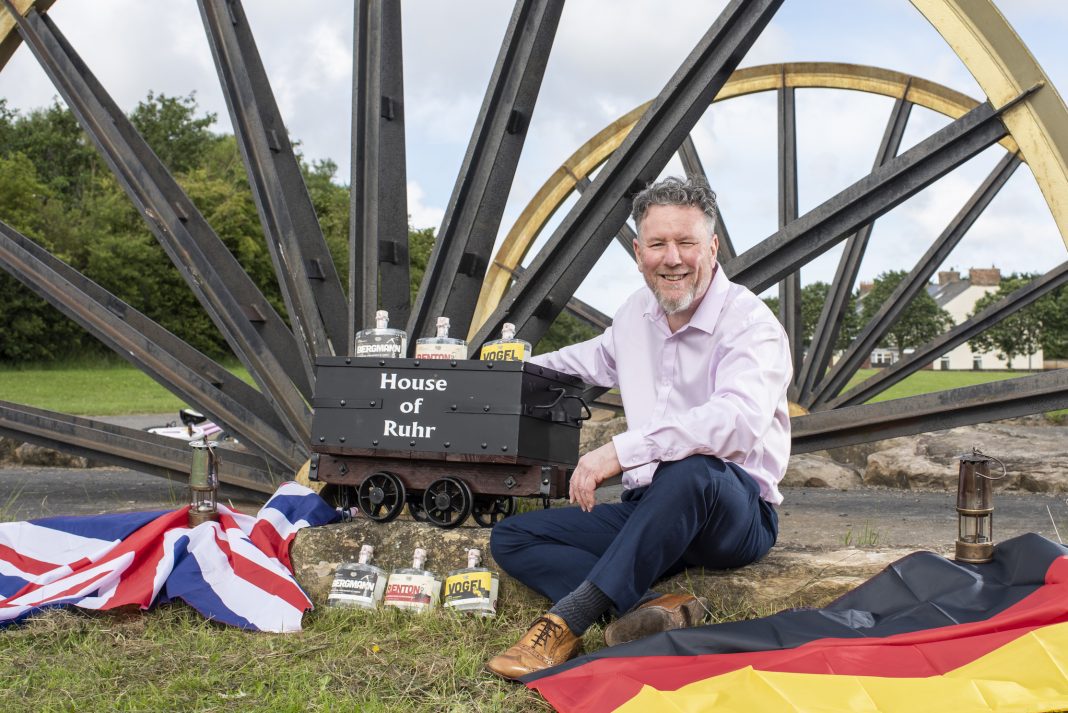 A chance meeting at an International Police Association conference with a Wearside bobby and his equivalent from Germany has led to a lifelong friendship, a new business importing Gin into the UK, strong links with mining communities in both countries and a beautiful family connection spanning three centuries.

Retired police officer Bryn Jones from Sunderland set up his Houghton-Le-Spring business, House of Ruhr, when he retired from Northumbria Police. The business began as the result of a friendship with German police officer Peter Meinken, whose family owns a distillery in the town of Wanne-Eickel in the Ruhr Valley.

His passion for the spirit inspired Bryn to set up his import business after Peter asked him to help get Gin made in his distillery to bars and customers in the North East. Peter is a member of the NUFC fan club and classes the North East as his second home.

Peter’s Eicker and Callen Distillery dates back to 1749. Every Gin is hand crafted and triple distilled to give it its unique flavour. The spirits are distilled using local botanical ingredients grown in a local nature reserve.

Sunderland and Wanne-Eickel share a lot of similarities including a rich coal mining heritage, and the two towns being a former heavy industry heartland of their respective countries. Indeed, Bryn comes from a family of coal miners which is highlighted in two of his three current brands.

“We have “Bergmann” Gin which is the German word for miner and contains Goji Berry, Physalis and Yerba Leaf amongst its botanicals while “Vogel,” the German word for bird, represents the yellow canaries that saved so many miners lives from coal gas and this has a more lemon flavoured base,” said Bryn.

The third Gin, “Renton” is named after Bryn’s maternal, great, great grandfather Captain James Ogilvie Renton who was lost at sea in 1871 and whose body was never found. A commemorative memorial stone to Captain Renton can be seen in Sunderland Cemetery.
Bryn was recently contacted by David Renton, a customer in Ireland who wanted a bottle of Renton for his father’s 80th birthday. His dad was the third generation in his family to be called James Ogilvie Renton and thus Bryn discovered that he had a “new” fourth cousin!

“I couldn’t believe that a bottle of Gin could connect families together – it’s sometimes called “mothers ruin” but in this case it’s more like “families united,” said Bryn.

Each of the three Gins distributed by the House of Ruhr is limited in number to just 2500 and every bottle is individually numbered and hand signed by the German distillers before they hand fix the labels to the bottles. They are available at a number of retail outlets throughout the region and also at the House of Ruhr website. Prior to lockdown, Bryn had been promoting his products at trade and Christmas fayres, private parties and corporate events earning him the nickname “Bryn the Gin Man.”

“Gin is one of the fastest growing drinks markets at present. In 2019, more than 11,000 bottles were purchased every hour of every day leading to around £3billion worth of sales in the UK alone. I’m delighted to be able to bring this quality German Gin to the North East and share our industrial heritage and good taste in spirits.”
www.houseofruhr.co.uk