Sunderland’s Summer Streets music festival will return this year, but the event will have a new home.

Summer Streets – which this year will be part of the Tall Ships Race – will move from its traditional site of Thompson Park, Southwick, to Seaburn Recreation Park.

The festival, which will take place on Saturday 14th July, is again being organised by Ross Millard, of The Futureheads and Frankie and the Heartstrings fame.

Ross said, “There’ll be the usual eclectic blend of touring artists, community groups and emerging local performers, but to mark the visit of the Tall Ships, as a one off we’re moving this year’s event to Seaburn.”

“I’ve been working with several local community groups and organisations to help put this year’s Summer Streets together. These include Southwick Neighbourhood Youth Project, Southwick REACH and Sunderland Carers’ Centre as well as local schools and artists.”

“It’s always been an inclusive, family-friendly event and there will be lots happening, all centred on music. The line-up will be revealed shortly, but it will be the usual healthy mix of musical styles and genres.”

“The programme will start at noon and go on till about 8.30 pm.” 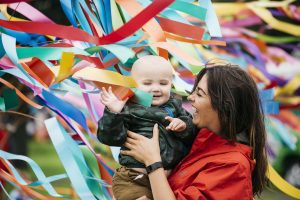 Lyn Kileen, of Southwick REACH, said, “We have incorporated a Southwick summer-holiday theme where there will be performances, speakers, a memory wall and a film screening all themed around Southwick to Seaburn summer holidays.”

“We are delighted to be bringing this unique immersive experience to Summer Streets and look forward to working with Ross to bring our plans to fruition.”

Shuttle buses will operate being Southwick and Seaburn Recreation Park. Festival goers can also take advantage of the Tall Ships park and ride scheme. There will be a good range of food and drink stalls at the event.

In previous years, Summer Streets festivals have featured acts such as Field Music, the Royal Northern Symphonia, and Frankie and the Heartstrings, and have attracted crowds of around 8,000. 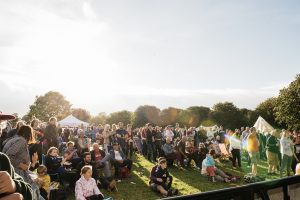 This year’s Summer Streets is being put on as part of the wider cultural programme linked to The Tall Ships Races 2018. The programme is being funded by the National Lottery through Arts Council England and delivered by Sunderland Culture.

Sunderland City Council’s head of events, Victoria French, said, “This is a fantastic addition to the entertainment programme for Saturday 14th July. The location will be stunning, with the backdrop of the coastline and the Tall Ships passing in their Parade of Sail.”

“I’m sure this will be a great event and a memorable addition to the history of Summer Streets.”

(The images with this article show scenes from last year’s Summer Streets festival.)