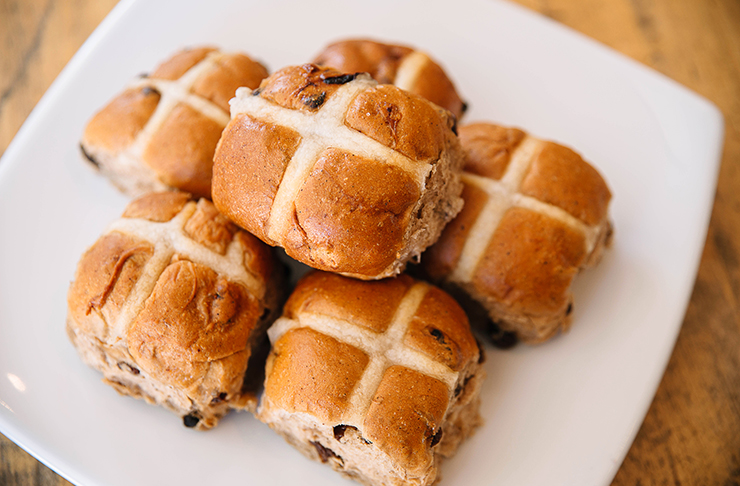 Good Friday commemorates the day on which, according to the Bible, Jesus was put to death by crucifixion after his disciple Judas Iscariot betrayed him to the religious authorities.

The authorities had felt threatened by Jesus after his triumphant entry into Jerusalem on Palm Sunday, when enthusiastic crowds had proclaimed him ‘King of Israel’.

But how did this important Christian festival get its unusual name? Why do people eat hot cross buns on Good Friday and why is this day associated with mouldy bits of bread, skipping ropes and free food distributed in graveyards?

Good Friday – what’s in a name?

The term ‘Good Friday’ has been used in England since at least the 1290s. Many people assume it derives from ‘God Friday’, but it is more likely to have come from the old practice of adding the word ‘good’ to the names of days, people or anything else considered holy.

Good Friday has also been called Holy Friday and Long Friday, due to the long hours of fasting that people sometimes undertook on this day.

Why do people eat hot cross buns on Good Friday?

The earliest-known reference to English people eating hot cross buns is from 1733, but these may not have resembled modern hot cross buns as it used to be a common practice to mark all bread and cakes with a cross before baking them in the oven.

To many Christians, hot cross buns have a deep religious meaning: the cross represents the cross Jesus died on and the spices symbolise the spices that were put on Jesus’s body in accordance with Jewish burial practices.

The custom of eating some sort of sweet buns at this time of year may, however, date back to before Christian times.

The Romans enjoyed treats made from sweet, rich doughs and the Saxons baked small spiced cakes in honour of the goddess Eoestre, whose feast was celebrated in spring and from whose name the term ‘Easter’ may have derived.

Although Good Friday falls in Lent, when Christians were expected to avoid eggs, meat and rich food, the rules tended to be relaxed on holy days, enabling believers to enjoy tasty snacks like hot cross buns.

As well as having an important religious significance, Good Friday has been associated with a number of strange folkloric customs over the years.

A common superstition was that eggs laid or bread baked on Good Friday had miraculous properties. It was believed that these foods would never go bad and that they could cure certain diseases.

There are accounts of people using eggs from Good Friday in Christmas cakes and puddings and claiming to have found them perfectly fresh when they were broken.

Bits of hot cross buns and other foods baked on Good Friday were often hung from the ceiling and allowed to go hard and stale. If anyone got ill, these items could be taken down, grated and put into food and drink, which the sick person consumed.

Stale Good Friday buns and breads were said to be especially good for curing stomach and bowel complaints!

It was also believed that keeping bits of these items could prevent houses from catching fire.

Other common Good Friday customs included the distribution of ‘doles’ – gifts of money or food given out to poor people. Instructions to give out doles were often left in wills and the doles were sometimes even distributed in the local churchyard from the grave of the donor.

The strangest dole-giving custom was probably one – called ‘washing Molly Grime’ – that took place at Glentham in Lincolnshire.

Here seven shillings were given to seven poor spinsters to fetch water from a well and wash a statue on a tombstone known as ‘Molly Grime’. This custom died out in the 1830s.

No one is sure how this custom originated, but some researchers feel the tradition may be connected with the rope Judas Iscariot hung himself with out of remorse at having betrayed Christ.