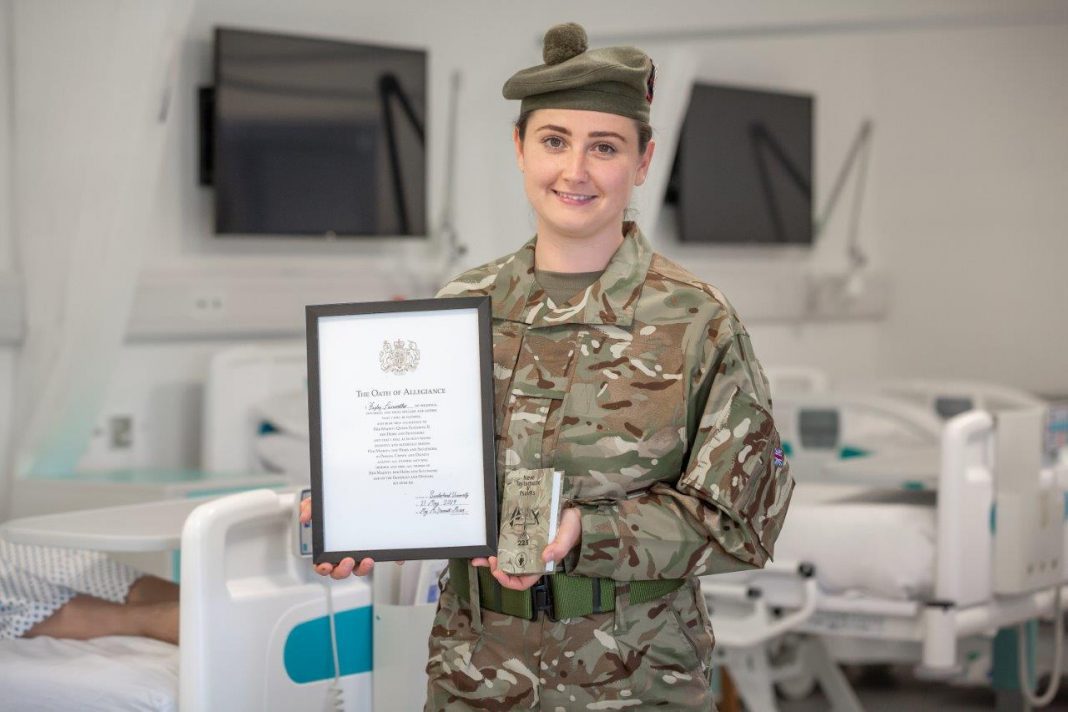 After spending the last three months with the NHS, nurse Hayley Fairweather thoroughly deserves her First Class Honours as she graduates this week.

After finishing her Adult Nursing Practice degree in March at the University of Sunderland, the 26-year-old dived straight in at the deep-end as an Emergency Department staff nurse at South Tyneside District Hospital.

Hayley said: “I thoroughly enjoyed my university experience. I enjoyed it more than I ever thought I would and have been lucky to make some amazing friends who made it even better. I am extremely happy with and very proud of my grade.”

She added: “As soon as I finished my course I began working as an Emergency Department staff nurse to assist with the pandemic. This has been a challenge but a worthy one.
“I now plan to remain as a staff nurse within the Emergency Department to gain as much knowledge and experience in an acute setting as possible.
“I would most definitely recommend the course to others who wish to pursue a career in adult nursing. Everything from the lecturers, available resources and the university campus sites are second to none.”
Gill Maw, Team Leader for Undergraduate Nursing, said: “Hayley’s achievements are outstanding and reflect her commitment to nursing and clinical practice. She will be an outstanding Staff Nurse with a very bright future.
“During such trialling times, our student nurses have contributed significantly to the NHS while progressing with their academic studies, and we are extremely proud of all of their achievements.”

Last year former nursery nurse Hayley took an Oath of Allegiance during a special ceremony on campus, the first student nurse to be attested by Major McDermott-Moses. The ceremony was held before officers of the 251 Medical Squadron, the University’s Vice Chancellor, Sir David Bell, and academics from the nursing team.

“It was such a proud day for me to take the Oath of Allegiance,” said Hayley who comes from a family of military personnel, her father was in the Royal Marines and brother is in the Royal Navy.

“I always had a big interest in the Armed Forces, but never previously had the guts to go and do it. But once I found out about the link-up between the University and 251 Medical Squadron, I signed up for the team-building days and it went from there.

“I would recommend that any student to sign up, it’s great for building confidence, teamwork and leadership skills.

“I would also add that any potential students thinking of beginning a nursing degree at Sunderland to definitely go for it and enjoy it as much as possible. It is a challenge but the rewards are much greater.”

Students interested in the Reserves take part in team-building activities, leadership exercises and trauma days, creating an awareness of medical careers in the Armed Forces. Working with the Defence Medical Services offers skills aimed at those wishing to join the military after qualification.

Recruitment Officer WO1 Dennis Mustard said: “Hayley took her Oath of Allegiance after completing her training package, passing her medical and fitness tests, and is now a fully-fledged Army Reserve Soldier.
“She was the first student nurse we attested into 251Medical Squadron, thanks to a partnership we embarked upon over two years ago, with the University, which is fantastic.”