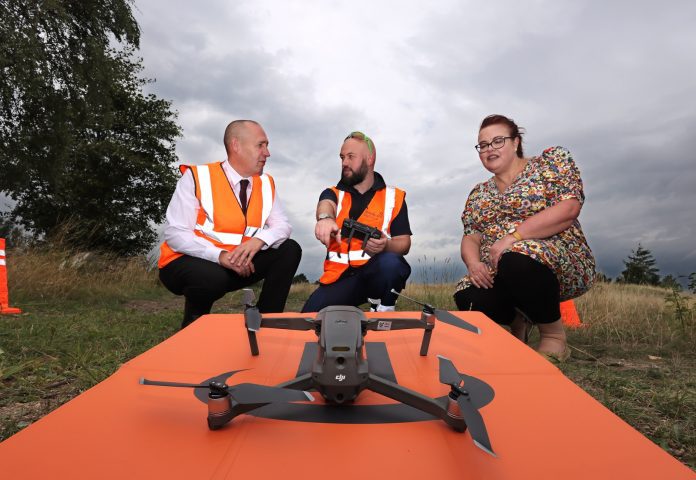 Two drones are now being used by The Council to definitely not spy on us, promise, and potentially deter fly-tipping.

The drones (unmanned aerial vehicles – UAVs) allow the council to more easily investigate and access areas with reports of fly-tipping. The drones are also being deployed against off-road motorcyclists, and as mobile CCTV to tackle youth and gang disorder issues.

Fly-tipping in Sunderland is not confined to back streets and built-up areas. As a large metropolitan and rural area that has hundreds of hectares of park and farmland, such as in the Washington, Hetton and Houghton areas, the council receives reports and information about fly-tipping in lanes, lay-bys and fields.

Every year the council receives around 10,000 reports of littering and fly-tipping from single black bin bags to multiple loads of fly-tipped waste (the same incident can be reported several times). The council continues to step up its enforcement work by taking on extra powers and new ways of working.

Deputy Leader of the City Council and Cabinet Member for Clean Green City, Councillor Claire Rowntree said: “The vast majority of residents – as they reminded the council in the 2020 Let’s Talk consultation sessions – want to see a cleaner and greener Sunderland.

“We already use drones in planning and surveying work, and now these two drones are going to help us in detecting and deterring fly-tippers.

“The drones can view sites that have been used by fly-tippers, record what they see, and then this aerial survey reveals information more quickly about how much fly-tipping there is and how it was accessed, such as if there’s tyre tracks.

“Investigation and monitoring work that could have taken a lot longer on foot can now be done by air survey. The drones are a smart and efficient piece of new technology that’s now being used for residents as we work together on improving our city and environment.

“The drones are not about watching or the surveillance of residents, it’s about helping residents and part of our drive for a more dynamic, cleaner and greener city.

“Residents tell us that they want to see more enforcement action against fly-tipping, and we would urge residents to continue to work with us. If anyone witnesses fly-tipping they can report it anonymously at https://www.sunderland.gov.uk/report-flytipping or by calling 0191 520 5550.”

The drones have cost £11,700 with licences and officer training of £2,700. Ongoing costs are being met from existing enforcement budgets. Deployment will be in line with Civil Aviation Authority regulations and compliance with the Data Protection Act to protect the privacy of residents.

Neighbourhood Enforcement Officer Andy Proudlock is now a qualified aerial systems (UAS) pilot, and two others are being trained.

Andy said: “We’ve all passed theory and practical assessments in CAA (Civil Aviation Authority) approved training schemes. We’re very much aware of the rules and the requirements and we’re also very aware of what a useful tool the drones can be for our enforcement work.

“Gathering evidence and understanding how or where fly-tippers operate can take time and the drones are helping make this work more efficient.”

The desire by residents to see more enforcement action against fly-tipping and anti-social behaviour was one of the key things to come out of the City Council’s Let’s Talk consultation in 2020.

Enforcement action has also included confiscating vans and vehicles suspected of being involved in fly-tipping with five vans crushed in the last 12 months. A sixth van is due to be crushed in coming weeks.

In May this year a Washington man was left with a court bill of £2,684 after he tipped building waste along Foxcover Road, Sunderland.

If anyone witnesses fly-tipping they can report it anonymously at https://www.sunderland.gov.uk/report-flytipping or by calling 0191 520 5550.

Residents are also encouraged to check if a waste collector they’re planning to use has a license on the Environment Agency’s website https://www.gov.uk/guidance/access-the-public-register-for-environmental-information or by calling them on 08708 506 506.

Alternatively residents can arrange for up to six items to be taken away for £10 by booking a bulky collection through the City Council at www.sunderland.gov.uk