The Sunderland-born artist, inventor and designer Dominic Wilcox is to give a talk at the University of Sunderland. The talk, which will take place on March 8th, will lead the listener on a high- speed journey through Dominic’s life and career.

How to Find Inspiration, Invention and Ideas will examine Dominic’s constant search for innovation. It will cover his time as a schoolboy in Sunderland before going on to investigate his connections with the Late Show in New York, London’s Victoria and Albert Museum (V&A) and the United Nations.

Dominic’s work combines the worlds of art, craft, technology and design. He has recently been working on ideas such as a pair of shoes with an inbuilt GPS to guide the wearer home and a driverless car with stained glass windows. 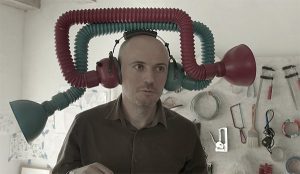 Dominic has also been involved in developing an audio device with which you can listen to the sounds of a city and has participated in a race against a 3D printer at the V&A.

Dominic said, “I’ve convinced myself that within everything that surrounds us, there are hundreds of ideas and connections waiting to be found. We just need to look hard enough.”

“Some of my ideas develop from observations on human behaviour and I express them through the objects I create. I also experiment with materials to try to find surprises that can’t be found simply by thinking with a pen or computer.”

Commenting on Dominic’s drawings, the designer Thomas Heatherwick said, “Dominic Wilcox’s drawings aren’t just witty and beautifully drawn; they are serious challenges to the real world to keep looking at itself with innocent eyes, wondering what else is possible.”

Dominic has been writing an award-winning blog, Variations on the Normal, since 2009. He has worked with a number of prestigious organisations including Paul Smith, Selfridges, the V&A, BMW Mini, and Jaffa Cakes.

Dominic Wilcox’s lecture will take place on March 8th at the University of Sunderland in the Sir Tom Cowie Lecture Theatre. Tickets are available free of charge, but must be booked in advance at onlinestore.sunderland.ac.uk